Ready to set up your new home theater? Let’s see, how complicated can we make it? Five to ten (or more) speakers, amplification for all of them, where to place them, how much seating and where, what to do about lighting, how to choose speakers, what sources to use, what cabling to use……oh. There is more to this than the old “theater-in-a-box” from that big box store. We will give you a head start with some orientation and basic ideas, then recommend you talk to a competent professional who also wires and installs these purveyors of movie magic. DIY is fun but there is no shame in being informed and then getting help. Even great equipment benefits from proper choice and placement.

The biggest component in your home theater is the room. It needs to be filled with sound but your room can interfere with that sound’s reproduction and reduce your enjoyment. Take the room dimensions and note things which affect sound, such as very high or low ceilings, vaulted or flat ceilings, multiple or irregular ceiling heights, locations and dimensions of doors, arches and windows, wall composition (masonry, frame, brick or block)and what furnishings will be in the room as well as their location and orientation. These factors affect speaker choices and placement as well as sound quality. Having this information ready will ease your design, purchase and installation.

Choosing speakers is involved but not necessarily difficult. The room’s cubic volume and relative dimensions can rule out some speaker systems: those cute mini-monitors which work so well for dorm rooms or desktop computers are not designed to fill large rooms, and if you overdrive them they will sound awful. You do not have to buy monster speakers, but be open-minded about size. A good dealer can help you with choices.

Assuming a good-sized but not huge space, say 20’x 25′, try picking the main left and right speakers first, as the center and effect (surround) speakers will need to match the main pair. This makes that choice easier. Audition them as you would a two-channel system, using at least some natural music with actual instruments and voices. If the speakers do not sound like the original instruments or voices, try another set. Most movie sound is indeed artificial but the idea is to REproduce the soundtrack, and accurate speakers are designed to do that. If you do your auditions with sounds you can mentally compare to the real thing you are more likely to wind up with a system that reflects what the maker of the music or movie intended.

Now things get easier. Tom Holman,the originator of THX standards for movie sound reproduction, strongly recommends “timbre matching” of all speakers in the system. In English, that means they should all have similar sound character. Holman’s point is that sound engineers just look at each channel as a place they can make sound originate and assume that pro theaters want seamless surround, creating an illusion which would not work with mismatched speakers. The most practical method is staying with one manufacturer for all the main speakers, front and back. Good manufacturers’ products tend to sound similar in character, changing in frequency response and output capability but not general sound character. This isn’t an iron rule but a good paradigm. The most important match is that between the left, center and right speakers. Most speaker makers provide matching center models for their two main speakers, ensuring at least a reasonable match. This is important as the center channel does much of the work–if you see something happening on screen, any sound it produces should apparently come from the screen, which makes sense. It’s not just voices, but any screen-centered sound. The left and right pair are usually for soundtrack music, things happening off-screen or effects which are to be very large or “panned” for motion, such as passing cars. Still very important, but as you have already carefully chosen them and matched the center to them you can let the soundtrack do the rest of the work.

Next come the effect or “surround” speakers. In early surround they were often placed at the rear of the room, creating an odd ping-pong effect but not a smooth 360-degree wrap. Theaters usually place effect speakers along the side walls though they have begun to add some at the rear for fill. For home purposes, the side walls are best, followed by on- or in-ceiling. Plan to wire and place your side-wall or ceiling effect speakers so they are not pointed directly at your seating, usually a bit ahead of or behind your seating. If structural or esthetic reasons don’t permit this, look at some of the bipolar(front- and back-radiating)models, which spread sound without directing it right at the listener. Consider models with pivoting tweeters if the bipolars are impractical. We sense direction mostly with high frequencies, and directing the highs so we can hear but not pinpoint their source makes the surround more natural. If you are using rear-wall effects too, the same rule applies: mount them above seated ear height and a bit to the sides of the seating area on the back wall. There are several systems such as Dolby Atmos which very effectively use additional ceiling-mounted speakers for a surprising illusion of things or ambient sound happening above the listener. The effect is dependent on how the film soundtrack was engineered and the processor included in your electronics. 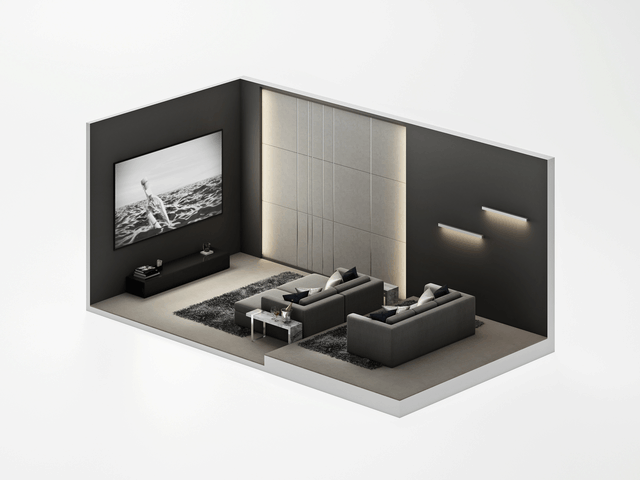 In our next post we will go a little deeper on speaker and seating placement.

Now for the part dear to “bass cases”, the subwoofer. The impact of action movies or great music is dependent largely on effortless-sounding very low bass which most reasonably-sized main speakers do not do well.

Soundtracks have a separate channel for low bass, usually giving sounds below 80 hz to the subwoofer, which is designed to do that. The sub channel has another benefit in its limiting how much bass the main speakers must reproduce, so you can cut the main speakers’ size but not quality, also making them more accurate as they do not have to work as hard and are free to give better sound in the mid-bass and up. Don’t get carried away and use much smaller speakers, which leaves a dip in reproduction between the pitches they can reproduce and the point at which the subwoofer takes over, producing an artificial “two-note” sound. Subwoofer placement varies with design and brand, but most work best near the front speakers, with corner placement upping potential output but adding possibly unpleasant boominess. Rear placement is to be avoided if possible, as there is a small but significant time delay between front and back.

Remember, movie sound tracks are largely artificial for more impact and designed to impress. When you are making decisions on a subwoofer, listen to more than just action movies. If dialog sounds “tubby” it is a sign the subwoofer is adding more to the conversation than it should. A good subwoofer should be sonically “invisible” until it is actually needed.

Choosing speakers first makes electronics choices easier, as you will know just what is needed to make those speakers sing. It sounds counterintuitive but under-powering causes distortion and can damage speakers during even short peak levels. There is no real downside to higher power than recommended, as it’s easier to damage a speaker with too little power than with too much. Most of the time you are using surprisingly little amplifier output power. Those staggering wattage ratings are expressions of output capability, and those extra watts shown in the brochure are not working all the time. The brief peaks which demand big power are worth having amp muscle to reproduce properly and safely. Fortunately, higher power has become more reasonably priced, making your power decision less worrisome.

Most electronics feature all the common surround format decoders, so don’t worry too much about that. Focus on reviews of sound quality, a competent dealer’s recommendations and the best test instrument: a critical ear. Ask your dealer what electronics are driving those speakers you love and consider using the same. If the dealer is showing you moderate-price speakers with an amp capable of arc-welding power, well and good, but see if you can audition with something similar to what you feel comfortable putting in your budget.

Our next chat will be on placement of speakers, seating and designing the system so it sounds its best but does not damage the room’s look or function.